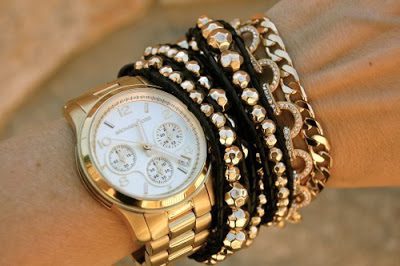 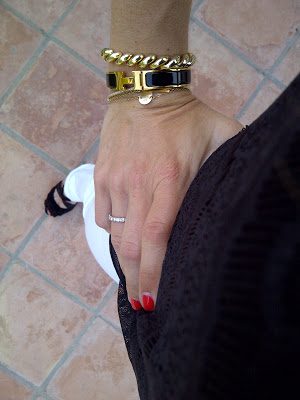 I love the combination of black and gold. When in doubt, I always reach for the large section of black in my closet. It is always chic, slimming and in style. Gold has been my favorite choice in jewelry every since my grandmother gave me my great grandfather’s ring with an H engraved in gold on black onyx. He was who I was named after, so this combination has a special place both in my heart and closet.
My Hermes H cuff also has a special spot in my heart. While I know {and understand} that Hermes is popular for most girls, I feel like they are made just for me! I’ve been thinking about adding an orange one in the thicker cut to my collection.
The first photo is a great inspiration for my favorite combination.  My selection includes my grandmother’s vintage Tiffany bracelet, H Hermes Cuff, diamond bracelet friendship bracelet with my mom, and an initial stamped bracelet with the hubby’s initial.